Thousands of Years of Evolution of Perfume Bottles

Those past stories about spray perfume bottle

The Egyptians were the first to use perfume. They built a perfume house next to the temple. Myrrh and cinnamon perfume were placed in a jar to cover the smell of mummies. The origin of perfume bottles can be traced back to 1500 BC when glass products were still a symbol of power and dignity. In ancient Greece and Rome, perfume bottles began to be used as personal items that can be placed indoors, and many imitated humans, birds, and other animals.

Until 50 BC, the glass blow molding process was greatly improved in Syria. Transparent glass perfume bottles decorated with stained glass became the treasures of Rome's upper-class ladies. At the same time, metal and enamel containers appeared in the perfume market. The time spanned to the 18th century. Oriental fragrances in ceramic bottles became a trend. The fragile nature of ceramics made them difficult to transport, making these fragrances precious. In the movie "Peerless Queen", Queen Marie Antoinette was deeply fascinated by oriental ceramics, leading the trend of the noble class. 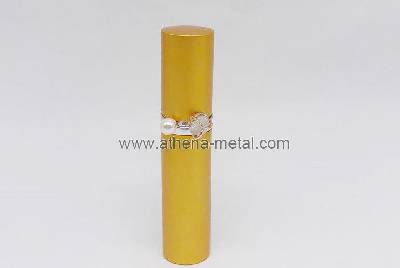 Among all the materials, glass is the most suitable for holding perfume. It does not cause any chemical interaction with the liquid and will cause the fragrance to change. Its cap is denser, which is conducive to locking the smell. Perfume and glass bottles became frequent visitors on women's dressing tables until the late 19th century. In the 20th century, the design of perfume bottles accelerated the frequency of trend changes.

Old perfume box and glass bottle perfume In the first 10 years of the 20th century, the Art Nouveau movement reached its peak. The perfume bottle design at that time was full of whimsy. The most commonly used form is a flower-like a brocade. For example, the Floramye perfume designed by L.T Piver in 1905, the bottle stopper is the crystal, the purple phalaenopsis is decorated with golden squiggles, and the carving is very beautiful. Corks were often used in perfume bottles during this period to store perfume like wine.

In 1907, a spray bottle was born. A balloon was attached to the outside of the bottle. The balloon was pressed and the perfume liquid was sprayed out. A spray perfume called De Vilbis was very popular at the time. It had the smooth shape of a wine glass, "opened" a few transparent glass flowers at the top, and slender ears fell on the tail of the balloon. This design seems a bit outdated and cumbersome now, but it just caters to the reverie of "feminization" at that time.

In the 1920s, World War I caused the decline of the beauty industry in Europe, and the United States became a major perfume manufacturing country. The new perfume bottle design reflects the gorgeous beauty of Hollywood-style luxury and desire. In Europe, the prevalence of decorative arts and inspiration from urban life inspired designers. Lentheric's Miracle, A. Euziere's Atakor, and three perfumes from Jean Patou, Le Sien, Amour-Amour and Que Sais-Je, are all representatives of this period.

The perfume bottles that came out after the 21st century are even more strange, and it is already difficult to find commonalities. Among them, Fame designed by Lady Gaga can be regarded as the best: black oval bottle body, golden beetle-shaped lid. There is Pink Friday launched by hip-hop female singer Nicki Minaj, whose perfume bottle looks exactly like her.

The most successful perfume in the 1920s was the famous Chanel No. 5. It is packed in a simple square bottle with a simple paper label and glass mouth. The linear design reflects Coco Chanel's never-ending character and simple modern design concept.

In the 1950s, American photographer Weegee's montage photography, he shot a swimsuit model in a giant Chanel No.5 perfume bottle.

On September 21, 2009, in London, England, at the 2010 London Spring/Summer Fashion Week, jewelry brand Donald Edge released the world's most expensive perfume bottle. The main body of the bottle is diamond, gold, and pearl, and the estimated selling price is about 2 million US dollars.

Our company can customize Round Perfume Cap, if you have any requirement in this respect, please feel free to contact us.

Previous: When To Consider Eye Cream